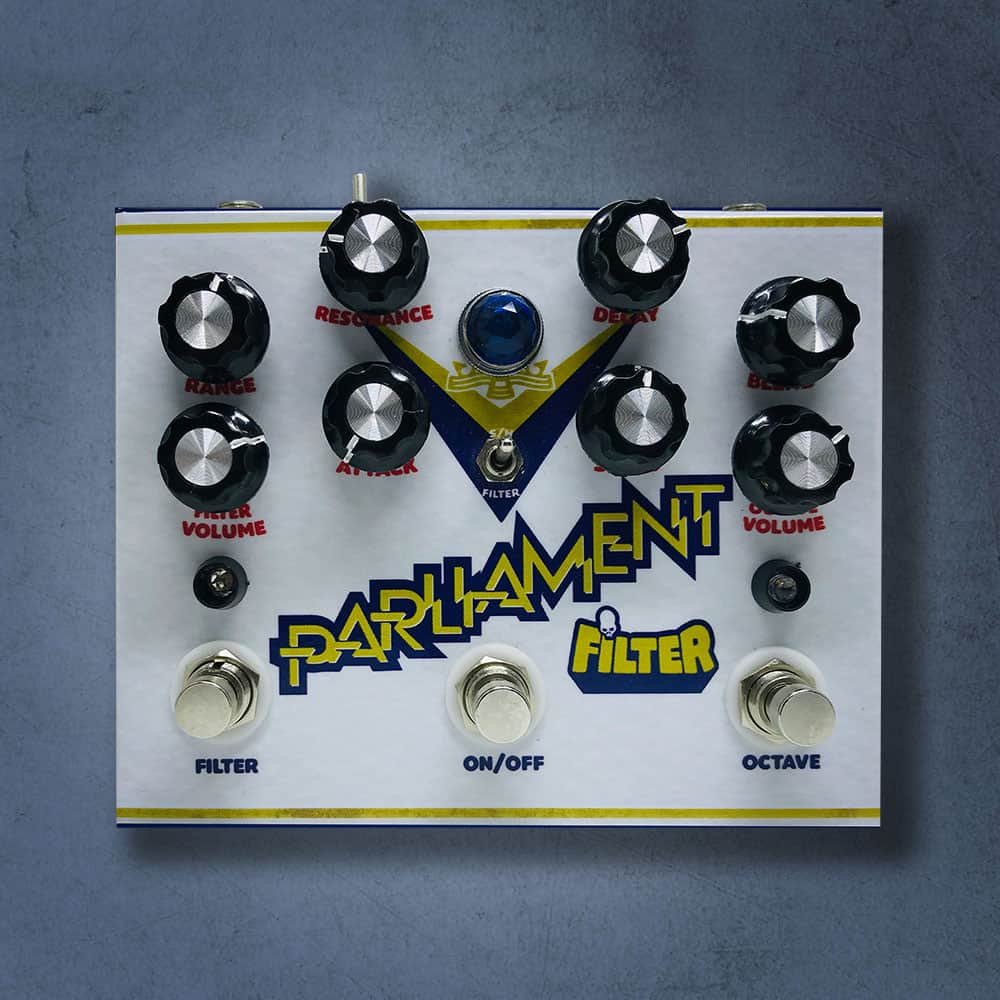 If you throw King Crimson’s RED and Primus’s Pork Soda records in the same basket then add a few more records like Miles Davis’s ON THE CORNER, Parliament’s CHOCOLATE CITY, Shuggie Ottis’s INSPIRATION INFORMATION plus Frank Zappa’s OVERNITE SENSATION you have the Sound Ingredients from our PARLIAMENT ENVELOPE FILTERFUZZ OCTAVE DOWN, a long long name because  the variety and quality of sounds you will have coming out of your amplifier speaker.

The first records  I mention (king Crimson and Primus) are the sound reference to Parliament’s OCTAVEFUZZ mode while the others are very clear references to our pedal’s Envelope Filter mode.

Not to mention on top of all what will bring by adding the effect of SAMPLE & HOLD in these first two modes.

Radical tones that often sound like an old and beloved Analog Synth in a small box!

Below we describe each Mode and its respective parameters:

FOOTSWITCH ON / OFF: Turns the pedal on and off without triggering either mode directly, when it is engaged and no MODE is turned on, the pedal will be in STANDBY.

The OCTAVEFUZZ mode with two octaves below:

The PARLIAMENT ENVELOPE FILTER OCTAVEFUZZ is a mix of fuzz with a two octave octave below triggered by the OCTAVE footswitch.

You have two potentiometers interacting with the octave:

1) OCTAVE VOLUME: The volume of OCTAVEFUZZ

2) BLEND: works like a DRY / WET potentiometer, the farther left you get the DRY SIGNAL (original guitar or bass sound with FUZZ) and the farther you move the potentiometer to the right, the more you get the WET signal (the effect only), the original guitar sound will be attenuated and only the two octaves below with FUZZ will sound without DRY SIGNAL, so whenever you turn the FILTER switch it becomes one of the best and original sounds this pedal does, and …if the SAMPLE / HOLD switch is turned on too, makes PARLIAMENT one of the most insane, musical, original and vocal-like pedals ever produced.

Yes, it performs better with the neck PICKUP and the more you play on the lower strings and also closer to 12th fret, it will have more accurate TRACKING.

This is one of the characteristics of this pedal!

RESONANCE is actually a type of feedback that causes certain frequencies to amplify much more than other nearby frequencies.

The filter RESONANCE  is the intensity of the filter.

The more you increase the RESONANCE, the filter will get louder and narrower, and this will make the wah effect appear brighter.

The moment you turn the filter on to the maximum peak value is called ATTACK.

The time from this peak to the minimum level is called DECAY.

DECAY will also set the amount of time it takes the filter to reach the final frequency.

The RANGE switch determines whether the filter moves in the low or high frequency area. The low RANGE produces the wah effect and the high RANGE creates connotations.

A circuit or function on early synthesizers that allows you to capture the instantaneous value (voltage) of a waveform and continues to generate that value until the next sample is taken.

This voltage is used to control another parameter in the synthesizer, such as a filter.

Depending on how they are used, a SAMPLE / HOLD circuit can produce fairly high random fluctuations in one or more aspects of a sound.

A good example of SAMPLE and HOLD applied to filter cutting is at the beginning of the classic Emerson Lake and Palmer, Karn Evil 9 1st impression Pt. 2

The potentiometers that interact with the SAMPLE / HOLD mode are RESONANCE, ATTACK, and SPEED.

If it’s not our best work done so far, I venture to say it is our most radical, inspired, ambitious, yet multipurpose and eclectic pedal.

Hopefully will reach the wildest and most innovative minds!