I thought MG Music was bigger than Marcelo himself, but now I’m sure not.

Who doesn’t know him, is losing a lot.

Who is a musician and does not know him, is losing everything.

Half of what I know about effects, I learned in MG.

Understand the sounds.
Listen to music in the silence.
Plays too much guitar…

I asked once since when he played the guitar, some of those jealousies that we pretend to be good, but really envious. “Since 17,” he said. Same age as I started playing. “And you played well at my age?” He said he went to the US at my age.

“Because I heard some sounds that didn’t have in Brazil. I wish I had a Gibson, I wish I had a Fender. I also asked him what he went to the US, “with a Kramer”.

“How did you bring it all, man? Did you work in a music store? ”I asked.

Nothing… worked like – MESSENGER – from a studio, delivering car errands.
Like an old motoboy.
He went to the house of Genne Simons, Sting, Bob Dylan.
And what was it?
“Ah, I had everything. Sometimes I didn’t even wonder what it was, it just took. I just wanted to use the studio in my free time. ”

He told him that he would call his friends to the studio, watch the band rehearse, and that more and more new people would come in every week until one day they told them and there were over 80 people in the studio. That turned into a party. “Too bad I was never like that again, it was delicious.”

Him telling me all this, and me just being quiet.

But once I had to go to MG Music and have 10, 15 guitarists there. People say they have to do pedal and amplifier repairs, but the truth is that people go to see Marcelo, play with Marcelo and hear Marcelo play.

True, I already took my amplifier to hear Marcelo play. It seems like more music comes out at MG Music than anywhere else.

I asked if he founded MG Music in 94 when he returned to Brazil. But no, it was founded in 2004. “I was dying to show everyone this sound that I hear in my head. God told me, You will have to set up a leading company. ”

“But it wasn’t always like that, we hated tube amplifiers in 1980. It was hell, damn heavy, it was hard work.”

And when did you start to like valve? “I think it was God, really. Once my transistor amplifier burned out. It was punishment.

But what happens is that fate speaks in codes. 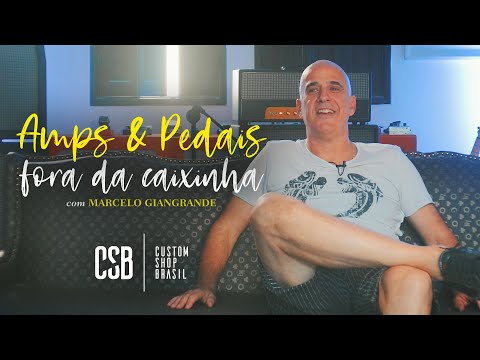 “I’ve always listened to music since a young boy. HELP changed my life. I had a double compact, and kept listening to the music all day. Until I found out I had another side. I remember to this day, it was the song NOT A SECOND TIME. It changed my life to hear that sensual, colorful music.

Colorful? I did not understand anything.

“Hey, don’t you see color in the song? I see all the time.

I also learned to listen to Stones with Marcelo. I was too silly to like Beatles and Stones at the same time. He loved Sgt. Peppers and knew nothing about Beggars Banquet. Marcelo showed me the LP and said: “It bothers me at first. It’s weird, but what doesn’t rip is not deep.

Today I can hear every harmonic of the Stones songs. Or I think I know, because every time I go to MG Music – pretend to have repair on my pedals – I hear a different harmonic. A different color.

And whenever I arrive, Marcelo is testing each of the pedals that is manufactured, each adjustment, each function. I learned that assembly line doesn’t exist when you want to make real music. That iPod shows you what music is up to page two.

“People have to understand that the material from which the iPod is made is not the same material as the human ear. We have to get used to hearing good tone. Bands have to last longer. The music has to be deeper.

I handed over my amp and said, “Po Marcelo, so test my amp that’s not cool.”

Before, I thought MG Music was bigger than Marcelo, but today I’m absolutely sure Marcelo is much bigger than any amp and pedal company.